It took me quite some time to figure out how to split those coins so I decided to write this short guide to help other people out that are in the same situation. The guide is based on the steps outlined by Greg Maxwell on Bitcointalk.org.

So let’s get started.

Send the Bitcoins to another Wallet You Control

The idea behind this is to transmit your bitcoins to a completely different wallet you control so that if anything goes wrong while retrieving your Bitcoin Cash coins, at least your bitcoins are safely stored in another location.

You could send the bitcoins to a different PC with Bitcoin Core installed, but I simply sent my bitcoins to my Kraken account. This is less secure but I trust Kraken enough to hold my bitcoins for at least the time required to split the coins.

On the PC which has the Bitcoin Core wallet installed, start Bitcoin Core, then select Help->Debug in the menu and select the Information tab. The data directory that contains the wallet’s data files is visible. Your directory may be different than mine: 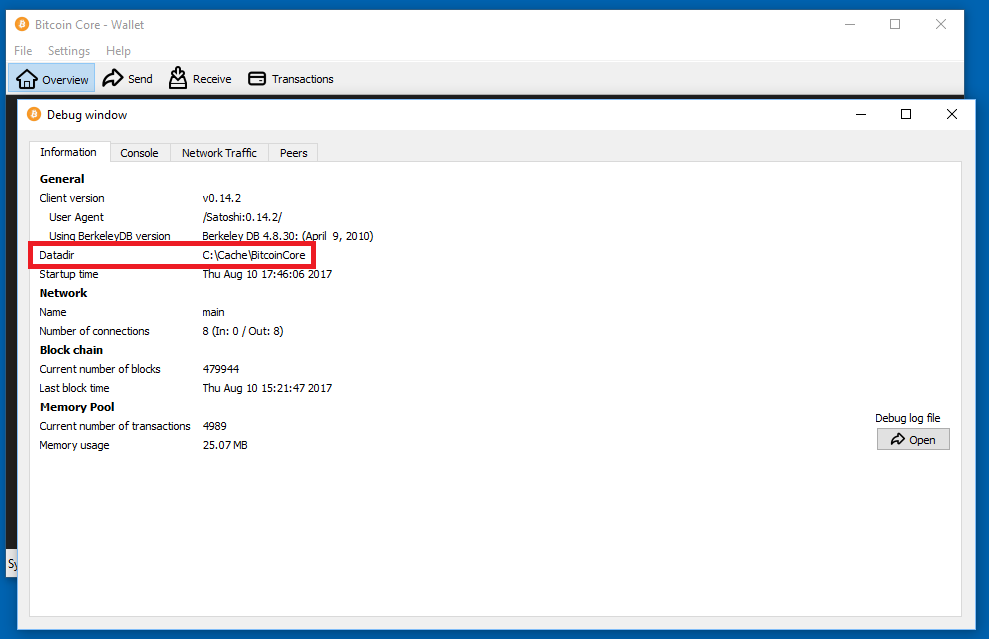 Now stop Bitcoin Core, then copy that data directory to the PC where you want to install Bitcoin ABC. The amount of data to copy is quite large (+- 140 GB at the time of this writing), so you’ll need to copy the data directory via the local network if you have one available or use an external USB drive with enough capacity.

Once the data directory has been copied, open it on the new PC, locate the peer.dat file(s) and delete it/them. Those files contains the addresses of other Bitcoin wallets on the network, which are invalid for Bitcoin Cash and so we must delete those files.

The next step is to download the Bitcoin ABC wallet and install it on the second PC. As I use Windows, I simply downloaded the file called bitcoin-0.14.6-win64-setup-unsigned.exe in the download section of the BitcoinAbc web site. 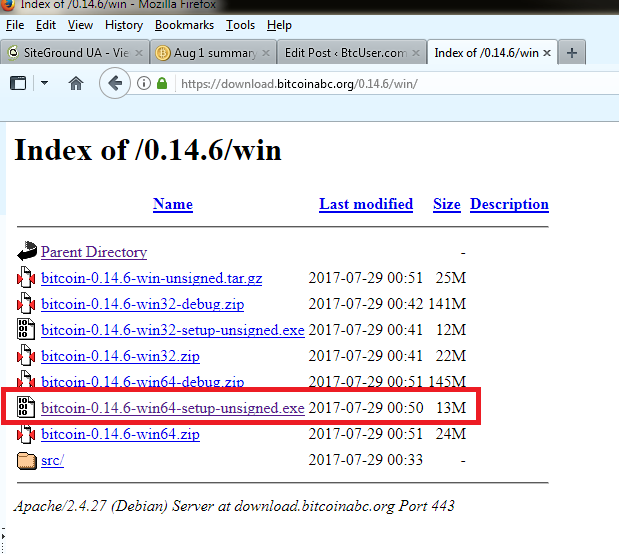 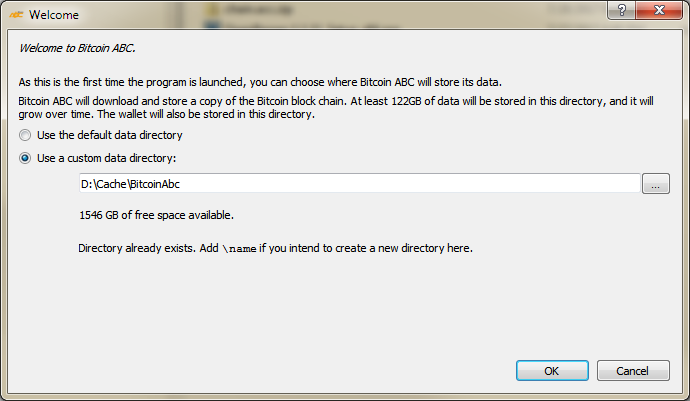 The main window of Bitcoin ABC opens and it tries to synchronize with the network: 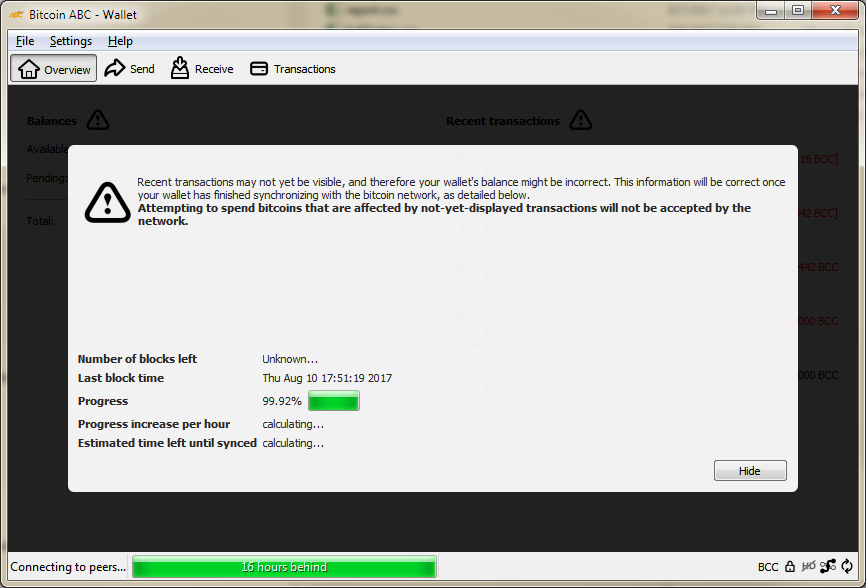 However, the synchronization is stuck because the data directory contains blocks from the Bitcoin Core wallet created after the fork, and those blocks need to be invalidated so that Bitcoin ABC discards them and downloads the correct ones from its own network. So do the following:

Bitcoin ABC should now synchronize the Bitcoin Cash blocks created after the fork from its own network.

At this stage, I have to admit that the synchronization process got stuck again after some time. I had to kill Bitcoin ABC and restart it. It then proceeded to synchronize the remaining blocks however.

At this point, the Bitcoin ABC wallet should have completely synchronized. But to my dismay, it displayed that I had 0 BCC available in my balance. It seemed the last transaction where I sent all my BTC from Bitcoin Core to Kraken was also duplicated in Bitcoin ABC. Not good. 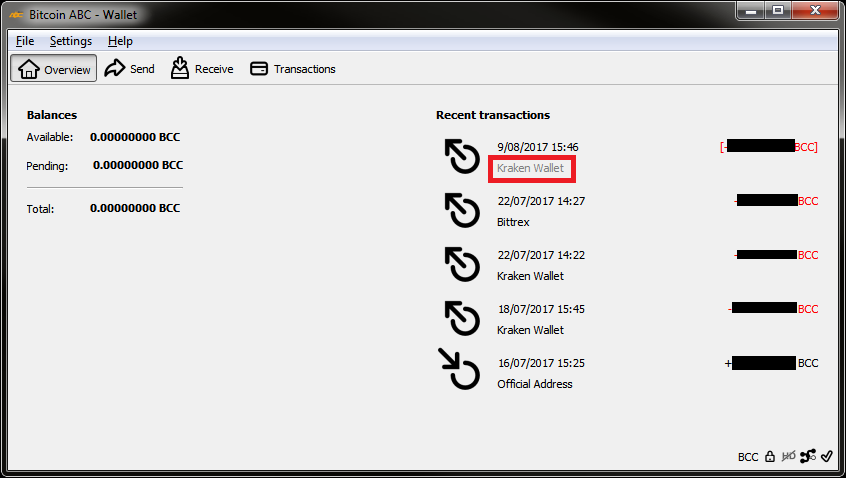 When clicking on the Transactions tab, then right-clicking the last transaction, it appears that transaction has the status Open for xyz more blocks: 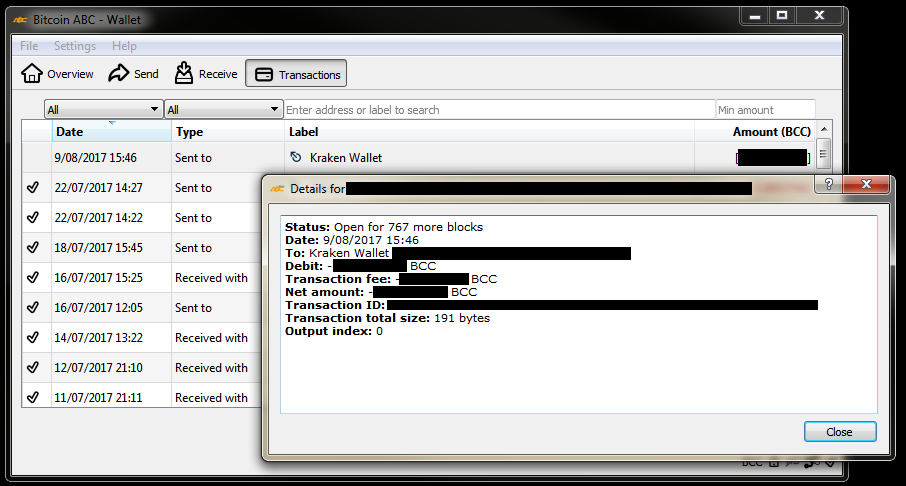 So this transaction hasn’t been confirmed on the Bitcoin Cash blockchain, and never will be. 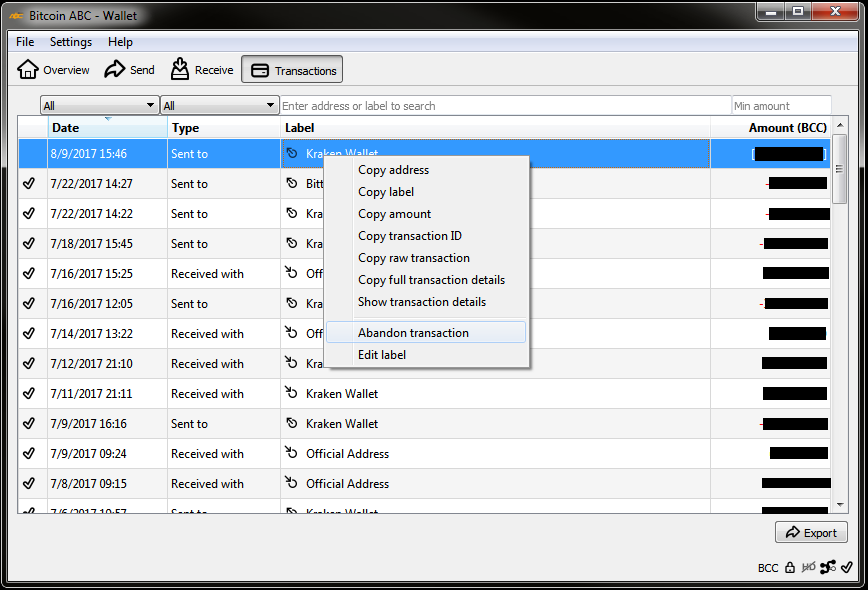 Note that the abandoned transaction still stays visible in the Bitcoin ABC wallet but this isn’t really a problem other than it looks ugly.

What About the Old Bitcoin Core Wallet?

At this point, the old Bitcoin Core wallet has no use anymore and should be discarded. So what you can do is open its data directory, back up the wallet.dat file located there just in case, and then delete it.

The next time you start Bitcoin Core it will create a new wallet.dat file, which essentially means you now have a new wallet with completely different addresses and your past transactions are not available anymore.

What I did was to transfer the bitcoins I had stored at Kraken back to this (new) Bitcoin Core wallet.

That’s it. I hope this guide will be useful to others that are also struggling like I did to have access to get their Bitcoin Bash. Good luck!

This website uses cookies to improve your experience while you navigate through the website. Out of these, the cookies that are categorized as necessary are stored on your browser as they are essential for the working of basic functionalities of the website. We also use third-party cookies that help us analyze and understand how you use this website. These cookies will be stored in your browser only with your consent. You also have the option to opt-out of these cookies. But opting out of some of these cookies may affect your browsing experience.
Necessary Always Enabled
Necessary cookies are absolutely essential for the website to function properly. This category only includes cookies that ensures basic functionalities and security features of the website. These cookies do not store any personal information.
Non-necessary
Any cookies that may not be particularly necessary for the website to function and is used specifically to collect user personal data via analytics, ads, other embedded contents are termed as non-necessary cookies. It is mandatory to procure user consent prior to running these cookies on your website.
SAVE & ACCEPT
Scroll to Top